Why are almost all the swear words in almost all languages female-centric??
By CookieCrumbsInc. 2 comments: 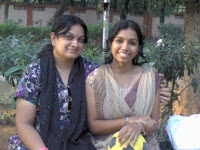 
I miss my mother.


She's always been there.


To fight. To disagree. To console. To talk sense. To yell. To have fun. To listen to me relate absolutely nonsensical incidents.

Scene: Person I know says ‘randomly’ during a study session.
“The house we have in Dubai is being renovated so I can’t really visit the Gucci store these hols. Oh ya, btw I found out today that I’m a Kanauji Brahman. Ain’t that kewl??=)”


Uh, why are you telling ME that, O all-knowing-ultra-rich-flaunt-in-my-face-female-who-takes-herself-WAY-too-seriously?? You could be a Kanauji Brahman or an Australian Cockatoo or even a Ugandan Flea Bird for all I care. Seriously. I don’t, D-O-N-T, give a rat’s wrong side.
Two things that I realized from this statement of hers.


Number 1: Human beings are SO VERY self-obsessed. Too much so. (Don’t get me wrong, I am not making judgments and I very much include myself in that statement) I get updates (and make them) about how bored so- n- so is and how obsessed so- n- so is with his/her love life and how they miss something/someone etc etc. Most of them start with an ‘i’ implication. But has anybody EVER taken a moment to stop and think WHY that piece of info about your life would be even remotely interesting to anyone else?


Note: Saby, however- whatever he is, is the only person whose updates are actually even remotely interesting (he has his own way of putting things).*kowtow*


p.s: when I get too obsessed with a bad hair day or a pimple or what so-n-so thinks of me, thinking about how much it’ll matter same time next month helps.


Number 2: India is supposed to be the prime example of Unity in Diversity and Ethnicity and whatnot. But still, most Indians, read: 95% of the population (and that too mainly the ‘educated’ classes), are so fiercely clannish, it’s disturbing. There are clear lines of division between people on so many bases’ that after a point it seems almost juvenile and villager-ish. ‘Mallus’, ‘Pandys’, ‘Madrasis’- active usages in the student community that I live in. I say: GROW UP and smell the shit you are cultivating. You people suck if you think being a Yadav or a Rai or a Menon or a Chettiar or whatever increases your value as a person, not to mention that you are making utter fools of yourselves.


As for me, ‘mallu’ by birth, with a Dad born in Trivandrum and brought up in Bangalore, Chennai, Bombay, South Africa and Singapore and a Mom born in Ernakulam and brought up in Bhubaneswar, Hissar, Chandigarh, Kolkata and Delhi, with aunts and uncles spread all over from Canada to New Zealand and Kashmir to Kanyakumari (literally) and brought up bang in the middle of TN (I was always an outsider, but that’s another story), it would be safer if I said- ‘world citizen’.
Scratch that. INDIAN citizen. A proud one at that. \m/


To Varun Nanda: India might suck in a lot of ways. Agreed and accepted. No opportunities, bad politics, horrible technology, irrelevant policies, weird psyche… generally sucks. But it’s the only country in the WORLD where you’ll ever be a first-class citizen. It’s your identity. Agree and accept.*hugsie*


P.S: There are four of you (who’d never prolly read this-_-) I’d dearly love to say ‘shut your trap, get over yourselves and get a real life’ but I doubt that would be diplomatic. To avoid ugly showdowns, I’ll shuddup and keep my opinions to myself.
P.P.S: The ‘Kanauji Brahman’ told me a month earlier that she was a ‘Tamil Iyengar ponnu’.
P.P.S.S:No offence meant =D

MA, zindagi do pal ki, intezaar kab tak hum karenge bhala. Move on. You deserve some happiness. Live for yourself for once. At least start now. (p.s: glad ur making progress)


NANDU, you are a wonderful person (and I’m not just saying this). So stop hiding behind the word ‘introvert’.


AMMU, you are the coolest Gran I’ve ever seen. Please stop being afraid of needles and take care of yourself more.


GAYA, do what your heart says and don’t give shit about what other people think. U are the one who’s gonna have to live with your choices, not anybody else.


PUNCH, you have a LOT to learn in life and the world is a much bigger place. Be open to it.


MAMMA, stop avoiding fights and take things head on. Fight for your right; nobody else can or will.


STICKY, hold onto that innocence of yours. It’ll take you a long way.


SELF, control your temper & tongue and stop eating chocolates like a factory.
=)
By CookieCrumbsInc. 2 comments: