When fashion blogger Tanvii put up the cheeky post with her repartees to 'advice' on how to 'rock' a marriage, I realized that I could very well convert the snorts that pepper the flow when I'm reading any 'relationship advice' articles into a post for my long sufferingly patient blog.

What gives me authority enough to snort? Two failed relationships and more years of being a saphead in them than I'd like to remind myself of, I could be somewhat of a (low -level, atleast) expert, don't you think?

So when this came in my mail, I jumped at the chance *cheeky grin*

They say: If a man wants you, nothing can keep him away.
I say: His ego can. Very much so. The Male Ego is a very real thing with a moustache and a personality of its won. Yessir.

They say: If he doesn't want you, nothing can make him stay.
I say: Complacence can. The comfort of being in safe (maybe boring) relationship can. Sheer laziness/fear of being alone can.

They say: Stop making excuses for a man and his behavior. Likewise, don't make excuses for your own bad behviour.
I say: It takes years for a person to mature enough in a relationship to not cuss when angry. Years. Till then, flying objects and bad language/behaviour is inevitable. In most cases.

They say: Allow your intuition (or spirit) to save you from heartache.
I say: Almost everyone almost always ignore their intuition. Which is why we have a world ablaze with dysfunctional, crazyass relationships.

They say: Stop trying to change yourself for a relationship that's not meant to be. And don't try to change him either, it just doesn't work.
I say: Biggest load of bull. Changing for someone in a relationship is inevitable because no two people fit together perfectly enough to not make little compromises and adjustments.Though the smart ones will change because they want to and the dumb ones will fill their lives with the relationship and nothing else.

They say: Slower is better.
I say: They didn't mean the other slower, dirty minds :P
Agreed. Obsessing over where it is going will spoil the moment. But this doesn't apply relationships which are over five years old and still are where they started from.

They say: Never live your life for a man before you find what makes you truly happy.
I say: Lets face it. None of us really wait for it and we inevitably have a heartbreak or two under our belts before we find that the one thing that truly makes us happy is shopping. Or chocolates. Or shoes. Or that LBD.

They say: If a relationship ends because the man was not treating you as you deserve, then heck no, you can't 'be friends.'
I say: Regardless of why it ends, 'being friends' is a common myth, an urban legend... in 95% cases. The other 5% are just awesome.

They say: Don't stay because you think 'it will get better.' You'll be mad at yourself a year later for staying when things are not better.
I say: LISTEN TO THIS. If you have doubts, reasonable ones, then it probably means that it is all going to the dogs sometime in the near future. But you won't listen. Why? Because we are built not to.

They say: Always have your own set of friends separate from his.
I say: GET A LIFE. Your own. No, seriously. Just because you are in a relationship doesn't mean you are attached at the hip. If you are, then its high time that you un-attach yourself.

They say: Do not make him into a quasi-god; he's a man, nothing more, nothing less.
I say: Pedestals are meant for fans. Trophies. A bowl of wax fruits(?). Not your boyfriend. Don't wax eloquent on his amazing-ness. Don't let him wax eloquent on his amazing-ness. If he wants to wax eloquent about YOUR beautifuls curls/eyes/nose/hair/ears/whatever, that's okay. But too much of that also has to be taken with a pinch of salt. Coz lets face it, we are not Megan Foxs or Scarlett Johannsons for him to swoon over all the time, every time.

I'm going to stop here, for this post is getting painfully long. 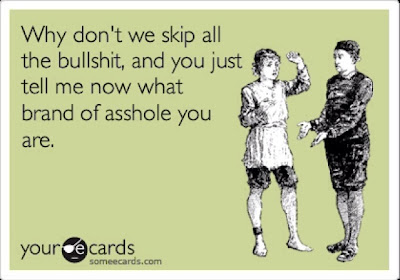 And regardless of how cynical the post is, finding one person that you can take goofy poser pictures with, seek advice on financial problems from, lean on when that headache threatens to overwhelm and depend on to drop the kids in school safely will always be worth all the crap. If you are lucky, that is.

P.S: Despite all the 'advice', you will get your heart broken. Therefore keep your pajamas close and a RockyRoad tub, Calvin & Hobbes and Enid Blyton closer.

P.P.S: No relationship is worth losing yourself completely in. No break up is bad enough to lose faith in love.

P.P.S.S: Commitment-phobia in a woman is a good thing. Be afraid. Be very afraid.
By CookieCrumbsInc. 36 comments:

....when you get to the office in the morning, there will be someone sitting there waiting to take the mickey out of you and your work and if you are anything like me, justifying prat that I am, you will try and explain to that person why it is important to note that I did exactly what I asked to with the parameters that I was given without realising that that person is too much of a *dash* to even listen to logic.

Then as the day wears on, the little fact that your appraisal went very well and your TL said nice things about you, and seemed to mean it too, is overshadowed by even bigger news that makes you want to puch someone's face off because of the unfairness of it all. And you decide to take the letdown very personally when the logical part of you tells you that was purely a business decision, that they don't love you like you'd like to think they do. That you are just another business unit.

Then you go to sleep and wake up the next morning with resolve and you realise how much you have changed. Changed from the immature, abusive teenager who could not let a thing go without obsessing over it for weeks, months, years even, to someone who can flick it off the shoulder, move on with life and make long run plans to prove them wrong.

And I thought work didn't teach me anything in the past year. Hah. 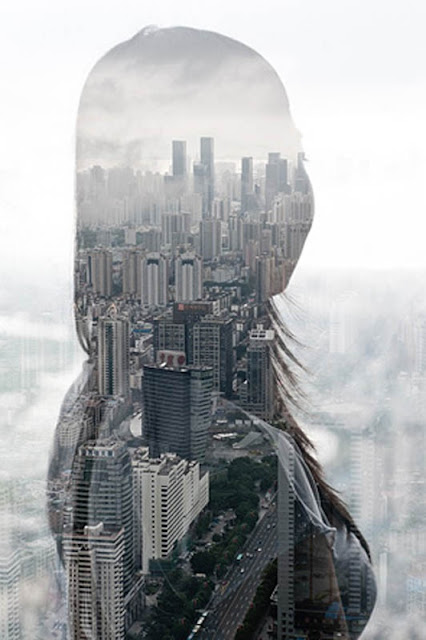 There, I've joined the billion other people on the planet with workplace grouses.
By CookieCrumbsInc. 12 comments:

When Snow Patrol said, 'those three words are said too much, they're not enough', they didn't know how many million people would identify with those lines on a deeply personal level.

Love is an overrated emotion, they say. But can any one of you tell me that you don't need it? That you don't think you need to feel that deep passion that reaches unto your very soul, takes a firm hold of your heart and makes you do things that you never imagined doing?

I came to Bangalore and I fell in love. With a depth that I never knew existed in this Universe.
And I wondered how I lived all my life without knowing that I could feel this way.

It didn't take much...
A look here, a glance there, a few well-said words and one meal later I was head over heels and hopelessly so. And I didn't even resist, I let the waves of pure adoration/lust/seduction wash through me even though I knew I might would regret it later.

All the symptoms were right there; years of being a Mills & Boons reader not only gave me false expectations from life/men but also directed me in diagonizing the symptoms of love right.

The butterflies.
The warmth.
The initial reticence.
The soul soothing embrace.
The taste, the touch.

And here I am, one year later, none the wiser and as happy as can be, still faithful, still head over heels, still floating with adoration of that one great love of my life.

Oh Pasta, My Pasta.
What would I be without you.

One mouthful of your creamy awesomeness leaves me writhing in the throes of a foodgasm that causes acute and apparent discomfort to all those around. Some people are choosy but I'm not; as long you are there and I am there and there is a fork, cheese and a hunk of crunchy garlic bread, I'm a happy, happy woman.

Not a day goes by without me thinking of where to meet you next and the weekend is much awaited for a billion different reasons, most of which lead me to you. Though you have been responsible for heartache/burn(?) when I overindulge and a few more pounds that I'd care for, you have always been that one constant in my life even while the world has fallen apart and then proceeded to reattach itself.

Thank you for that.
Be mine forever. 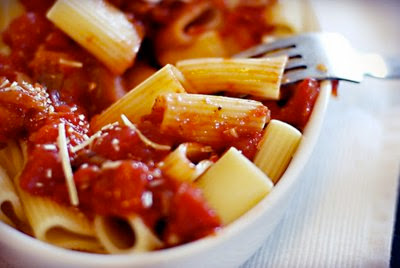 I'm done with the dramatics, you can leave now
#kthanxbai
:P
P.S: If you knew me and my obsession with food and have ever come to dinner with me even once, you won't find this post disturbing weird :P and you'd know that I always ALWAYS order the penne on the menu. Like I said, my one true lowe :D
By CookieCrumbsInc. 18 comments:

Farzana and Twisha liked a photo of the Eiffel Tower on Facebook and that was enough to send me off on yet another tizzy of uncontrollable wanderlust.

Somewhere along the way I woke up to the fact that without even realizing it, I have been dreaming of going to Paris all my life, not because it is the city of love and I am sappy but because I'm a true Arian who loves the quaint, adventurous, classic beauty of the city in all the photos and pictures that I hungrily devour with my eyes.
Some say Paris is over rated. But I don't think that's the case at all. Or it might just be the images of luxurious opulence that is the Champs Elysees playing tricks on my mind.

Actually, its not just Paris, it is the whole of Europe with its exotic, alluring charm, quaint accents and wonderous cuisine that draws me into its never-ending loop of storybook beauty, the kind that I grew up reading about and dreaming of.

I'm finding hard to resist the wanderlust as the days go by. I stalk travel blogs silently, envying the creators, wishing I was them. I fear that one day, it might just get too much for me to handle, that I will blow my ties to the world away to pack up and leave...

....in search of all the breathtaking, mind blowing, spectacular cities that I so so yearn to roam.

What I fear even more is that I might be buried one day, some day without having my breath taken and my mind blown, in which case, the photos will be everything and all that I'd have seen in a lifetime.

I leave you with a few images, take one look and tell me they don't make you sigh for lands unknown. If they don't, then you have yet to experience the deep, relentless pull of wanderlust that can make you sigh like no kind of lovesickness can.