Mostly I have only one reaction: 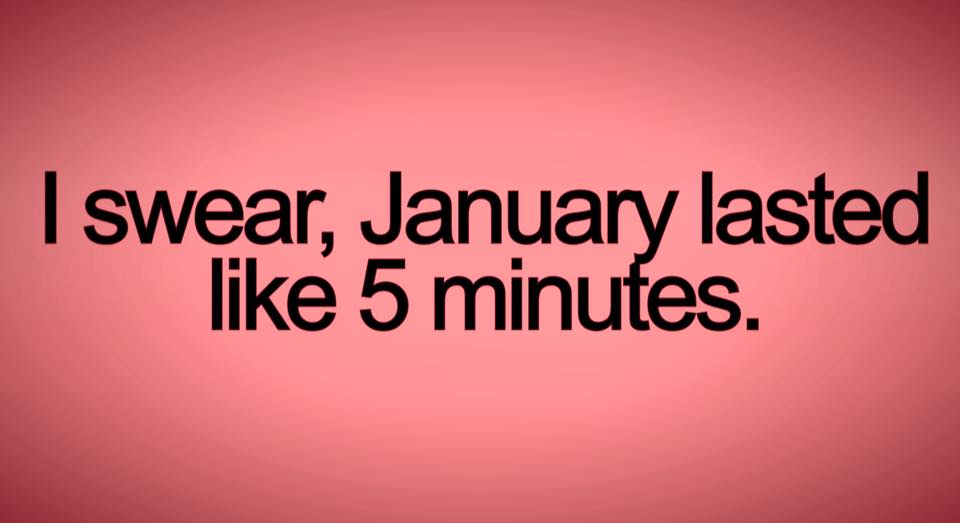 New year’s eve and January 1st were spent with some of the people I care about the most in Bangalore – we laughed and laughed and played board games and laughed some more. We took a break from the laughing to dance and group call those who were not with us. And then we resumed laughing. It was fun, to say the least. And more meaningful than any party I could have attended.

Work pressure eased out a great deal – it was like January came around and all my problems just fell away. Someone I really look up to came back to my team and I breathed easier for it – I knew all the messes would be cleaned up now. He is being hard on us but it is worth it.

I went off on a much-needed vacation during the Republic day weekend. It was lovely being so cut off from everything, not being able to use my phone for anything except clicking photos. I found the perfect place to sit and read, and I went skateboarding down a ramp… several times. It was crazy. Then I trekked and fished and zoned out of life as I knew it and I loved it. I came back with a better head – one that wasn’t crammed full of questions and stress and God-knows-what-not, and I’m a happier person for it.

Some of my new year’s resolutions/decisions are on track, some fell away and some were forgotten from day two… Ah well, something better than nothing, right. Fitness is still on the backseat, I cannot seem to find any kind of exercise that I can stick to for longer than a couple of days.

The horoscopes say that Arians are going to have the best year in a long time and despite my logical side shushing the incredulity of it all, I can’t help being hopeful – the last few years have been stressful, physically and mentally, it was one thing after the other. So maybe this is going to be my year after all :)

Days are full, nights are deliciously cold, time is flying.
And I’m hooked on to The Hanging Tree.

February, how you doin’?
By CookieCrumbsInc. 10 comments:

P.S: Sorry about being such a downer, I'm not depressed or anything. Just how Mondays make me feel. BAH.
By CookieCrumbsInc. 11 comments:

A set of gentlemen, who rose to fame doing standup comedy on Youtube, decide to up the ante of comedy in India and do a roast (click to find what EXACTLY a roast is). A very well-known set of gentlemen and a lady, who are from the entertainment industry, were roped in to be part of the aforementioned roast. All said characters were above 18, the videos put on social media came with clear, simple disclaimers announcing the explicit nature of the content and the profanity used. Karan Johar said, before anything else, if you are easily offended, or even offended at all, please stop watching.

Now, my question to all those who are “offended”, “disgusted”, “throwing up”, think that it is against Indian culture (I’m laughing so hard at this one), feel that AIB has committed a serious crime by misusing the freedom that netizens have and believe that they hurt the sentiments of people: WHY DID YOU CONTINUING WATCHING, YOU MORONS? Did the “Close Window” button disappear? Were you hynotised? Tied down?

1) The very point of the show was to introduce roasting, a form of comedy that has existed for decades now, to India and the fact that AIB was able to find established celebrities to take part in it and allow themselves to be taken potshots at, is commendable. Like it has been said before: us, Indians take ourselves too seriously. We are a bunch of people who can’t laugh at ourselves. We lose no time in making up Sardar jokes, Bihari jokes and Mallu jokes but the moment the joke turns on us, we get up on the high horse and become snooty as hell. I’m guessing most people who have a problem with the entire thing haven’t even watched Western roasts which are far, far more “insulting”.

2) Two big stars of the Bollywood (going by popularity) got insulted about their acting skills, about their looks and behavior and even how pathetic at studies they are. One of the most prominent directors of Bollywood, a well-respected film critic and a group of boys who are trying to up the ante of stand-up in India - they stepped in to get insulted voluntarily. Mind you, these are people whose careers depend on the image they have, they still chose to have that image trashed, all because they had the balls to try something new. Which one of you would like to take their place? Huh? Forget that big a scale, try standing up in your office and doing something embarrassing, or even have your boss have you pull you up for coming in late in front of the whole team. I’m sure most of you will cringe away from that.

If you can stand up and be okay with being made fun of for being obese, gay, dark, generic looking, unsuccessful, bad at studies, bad at relationships, or any of your other billion shortcomings – go right ahead and criticize AIB and their roast for all you are worth. Otherwise, shut it.

3) I don’t understand what the big deal is about profanity. Like you have never heard ten cuss words in a string before. The show was predominantly in Hindi, so they cussed each other out in Hindi. Shows like Roadies, Splitsvilla and Big(g) Boss which everyone is a fan of (let’s get this straight, while everyone openly disses these shows, we all know that they wouldn’t have continued for ten odd seasons if they didn’t have through-the-roof ratings… which basically means that we are all watching it secretly:/) have beeps in the televised versions every five minutes and the Youtube versions aren’t even censored. But suddenly when AIB pulls off a successful show, you will realize how “LS” the cuss words are, is it? Double-standards, much. You are going to be all uppity about a comedy show? So what jokes DO you want to hear? Ones about the chicken crossing the road?

Also, two words for you. DK Bose.
I didn’t hear anybody being deeply concerned or asking for public, unconditional apologies over a certain catchy number that even children had started to sing.

4) They sold tickets for a good cause and gave the patrons their money’s worth.  Yes, you I-take-myself-too-seriously person, some people took it in the spirit it was intended in, paid money and laughed and then continued with their lives. Charities benefitted. People’s lives became slightly better. And there ends the matter. It should have ended there for you too - you have way too much time on your hands and no semblance of a life if you take comedy shows seriously.

I’m not a die-hard fan of AIB or anything - I like some of their videos, I have watched and re-watched them, I don’t find some of their videos funny at all. But I am very, very impressed with their out-of-the-box thinking, at the way they got such big names to agree to being roasted, at the sheer guts for having pulled the entire thing off in a country like India.

I’m not saying you have to like it. I’m all for you having an opinion, positive or negative. But judge the roast with the same yardstick that you use to judge comedy in general, for this is just a form of it. They tried something new and they made it work. If you can top that, then do that. If you can’t, leave them be. Don’t try to malign just for the sake of malice.

In my head, this is Charlie Hebdo all over again. Not in the gravity of events but the media, any form of it, having the right to freedom of speech. They said their piece, agree with it, choose to disagree, but let them say what they have to. Have the courage and the confidence in your own opinion to let other people have their say, the way they want it said. Otherwise, you are no better than a schoolyard bully whose brain never really made it to adulthood.

P.S: Linking to AIB's response to the entire fiasco which I find extremely mature.
P.P.S: "You" is not a general statement. It is a pronoun referring to all those people who can't take a joke.