I just stand there, restricting my person to a side for I did not want to make ripples in the flow. They swarm like bees around me… walking in their own chosen groups, sometimes even alone.
They all afford me only passing glances, some direct, some surreptitious… I’m nothing to them, just one more in the shifting crowd that rarely looks at a face a second time. To them I’m just another girl in an ordinary kurta and scuffed jeans with a lot of baggage, boredom clearly coloring my tired features as I wait for my ride. They pass me by from all directions; each lost in their own world, each with their own pressing worries, problems, needs and lives.
It amazes me, the sheer volume.
I spot patterns… The mother with the toddler who screams for a cheap balloon; she is helpless as her explanations about his father getting him a ‘better’ toy fall on deaf ears. Why? The child does not comprehend the divide or the difference between himself and his scrawny, unkempt contemporary who forces me to buy safety pins so he can buy a balloon from the unrelenting seller who knows no charity.
I also notice the young couple on the way home. How do I know they aren’t married? I can see dreams of a union in both their eyes, distant but shimmery and very real. A pang shoots through me as does a silent prayer to The Puppeteer to keep them happy. After he carefully puts the last golguppa in her waiting mouth handing her his pristine white hanky while reaching for his wallet to pay the nonchalant vendor. Her implicit trust in him is palpable as is his iron belief in what they have together; he never once lets go of her hand in the crushing crowd. At least not until they flit out of my horizon along with a countless others. My mind wanders to another couple… I wonder how things are with them.
I see the groups of friends. They are almost always disjointed for one of them almost certainly has an unresolved tiff with another. And one of the girls has always fallen for the wrong guy. But they always skim over the surface and pretend the under currents don’t exist for they are at a place where independence rules their heads and responsibility rears its ugly head from the near future.
Then there are the families. The father tries really hard to control his women from running amok among the silks and stones that beckon them from the grandiose show windows. He shudders visibly at the thought of this bank balance depleting before he can say ‘card swipe’.
It’s like I can almost hear their voices…
“Damn, this is expensive… But I want this so bad!”
“My feet hurt like crazy but she doesn’t seem to want to stop…”
“I don’t remember if I switched off the gas, should I call Lalitha and ask her to check?”
“Ugh, drivers today have no ethics, why the hell did that ass overtake from the right!”
“This is half my savings! But maybe tonight she will….”
“I can’t do this anymore. I’m going to make it stop. I want to end this existence” 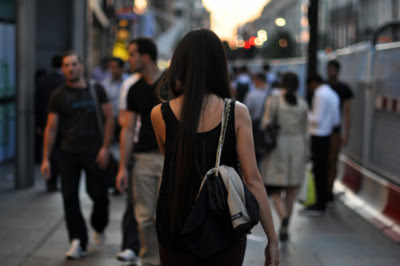 Is it what I think it is?! Stunned, I spin around to see who that thought had emanated from. What I expected to see, I don’t know, but a sea of human bees buzz back at me… the voice I heard lost among their million voices. I take a few steps in the direction I think the thought came from – for what, I don't know. Maybe I can help alleviate the depression that surrounds her life with a few of my own sob stories… make her realize that other people have worse problems than whatever demons she faces. If nothing, I can tell her she isn’t alone. This was not the answer. But the voice, the thought, is already lost to me.
The signal changes and my ride chooses that precise moment to arrive. “Get on. Fast. The traffic police will give me an unnecessary ticket if I park here,” she says, urgently. I hesitate, still hoping I could spot The Voice. I reluctantly swing a foot over the seat, never once taking my eyes of the crowd; I had some weird notion that I will recognize her even though I had not seen her. As we blend in with the traffic, I keep scanning the faces all the way till the sidewalk ends and then some.
But sometimes, search as one might, you never find what you’re looking for, for some things in the Universe are to be left alone.
I really didn’t want her to be alone, though. I really hope she is okay.
By CookieCrumbsInc.