I have had a long-ish relationship with James Patterson novels and the sheer thrill of reading about murder and mayhem keeps me hooked to the genre that he has mastered. I remember reading my first Alex Cross novel while I was still in school, publicly aghast and secretly thrilled at the kind of language and the ferocity of the crimes described. It was a very good way to lose my innocence, in a manner of speaking.

The remnants of the thrill (for it’s been a long time since I had my nose buried in a James Patterson title, I hadn’t even heard about the more-than-6-book-old Private series) ensured that I added “Private India” to my cart when I happened to edit a book description at work. But just before I went ahead and bought it, came BlogAdda’s book review program, I tried my luck and the book was delivered in less than a week’s time. For free, mind you. Imagine my delight.

I haven’t read Ashwin Sanghi, nor do I intend to. I have to admit that it was a bit of a dampener to have him collaborate with Patterson – I really did expect a mess of a book. And at 450-odd pages, I was wondering how I was going to finish it in time for a review. But I needn’t have worried, the print is HUGE and hence it took me all of 4 hours to wrap it up. 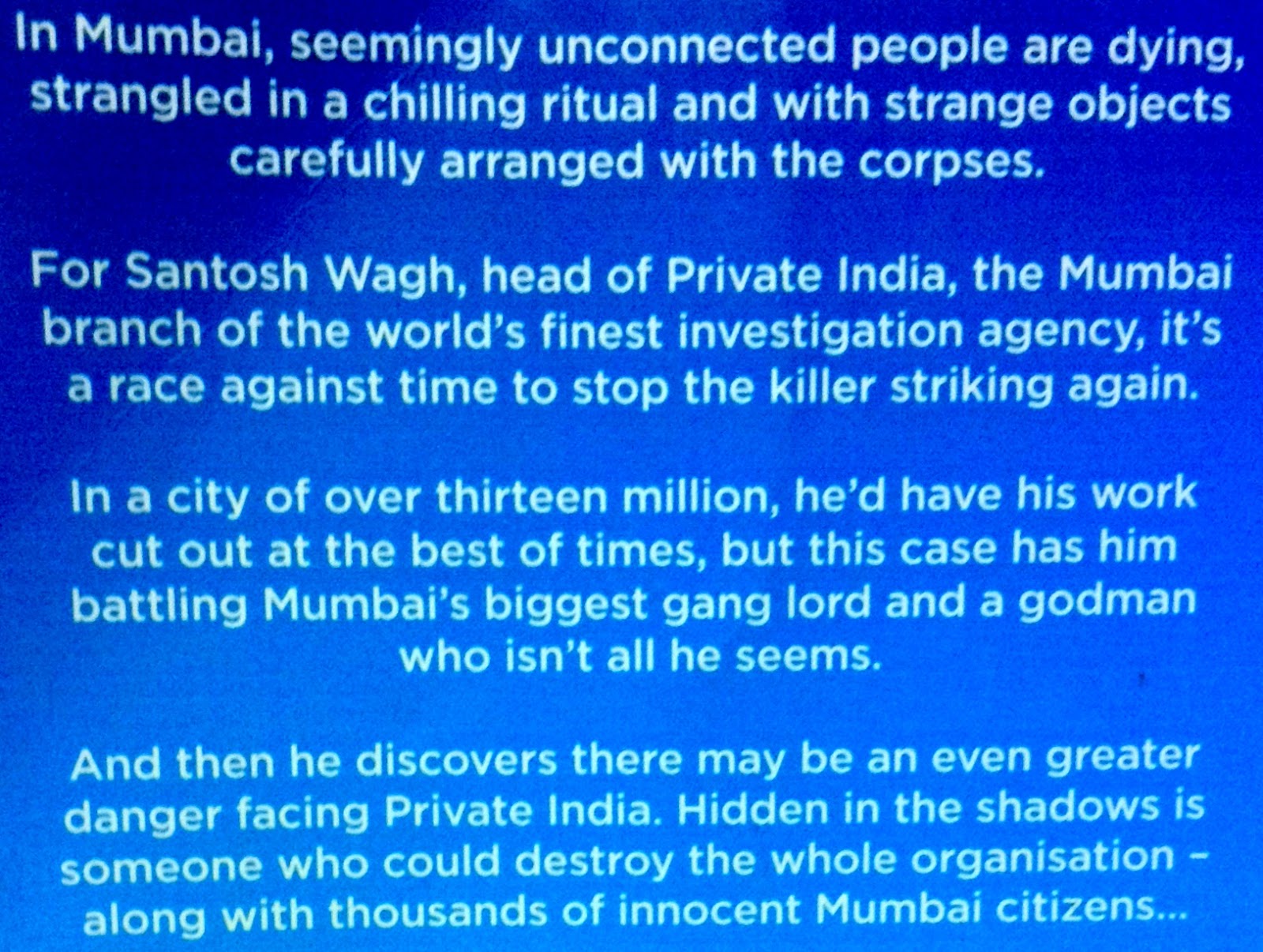 First, the bad:
•    What. Is. Up. With. The. Drama!!! So much of Bollywood-style dramatics happening throughout the story, almost making it seem like someone had a movie in mind rather than a book. Jack Morgan’s presence feels useless, to say the least.
•    Though the background story of the lead is a run-of-the-mill one, it could have been dealt with in a much more engaging manner. I feel that the whole emotional angle has not been exploited completely.
•    Trying to Indianize western characters is one of the big mistakes Indian writers make. We should stick to our own kind of characterizations without trying to ape the kind of descriptions of characters that the Westerners have. Capturing the nuances of Indian-ness and the quirks that come with being innately Indian are not only very interesting but also something that most pop Indian writers ignore.
•    The plot within the plot hasn’t been executed well, thereby making the bigger picture of terrorism seem like just an appendage when it could actually have added to the story.
•    The usual Patterson villains are creepy and eerie, the villains in this book are sort of bland.
•    Jack Morgan’s somewhat lukewarm acceptance of his friend/lover’s murder is disturbing.
•    I failed to fall for the underdog lead character, which is actually a first.

Now, the good:
•    Classic James Patterson-style narration – a chapter about everything else and then a chapter about the murderer, alternated. I loved it, to say the least. If this was penned by Sanghi, he has managed to carry it off with élan.
•    Slow build-up to a fitting finale, most of it was executed well, making it a very racy read. Staccato bursts of chapters keep you riveted.
•    The ending leaves the thread open to more from the series and if executed better, I’d definitely like to read.
•    A drastic reduction in the number of typos and spelling mistakes and grammar errors from the last so many Indian-English books which I have read. Only a few phrases stand out as having heavy MTI, so to speak.

On the whole, a decent read. Next time you settle down for a long train journey or find yourself out of things to do on a Sunday afternoon, pick this one up. Whether you like it or not will depend on what literary diet you are on: Kafka-lovers will thup at the book while Bhagat-lovers will be overcome with joy.

This review is a part of the biggest Book Review Program for Indian Bloggers. Participate now to get free books!
By CookieCrumbsInc.