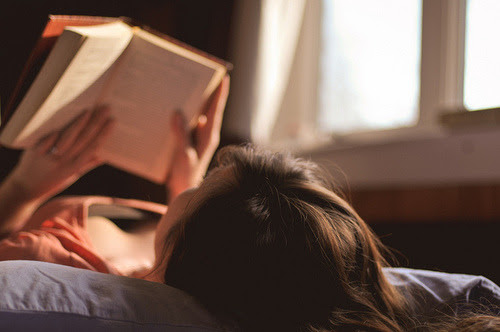 The entire length of her long, long legs straight up in the air, all curve and tan, with just a hint of pink right at the tips… charming, really. The curve of her spine rounded off into a shapely bottom that the worn-out cutoffs barely made it over. The piercing poked out from under the tee covering the little concave of her tummy. The book and the glasses rested on the graceful swell of her chest while the neck bobbed around with her head as she expounded theory after fascinating theory. The short dark locks fanned out around her head like an angel’s halo, except there was nothing pious about razor-cut edges that were tinted a deep purple.

She told me in confidence that the piercing had been part of the Rebellion Against an Arranged Marriage. She matter-of-factly explained that it “hurt like a nail to the eye” and that she’d save herself the trouble if she had a do-over. But as long as she already had it, she loved it. I was fascinated. Smitten, even.

We talked all night of things that mattered and things that didn’t. Her joie de vivre clashed terribly with the darkness that lurked behind her veiled eyes – I wondered vaguely who had done what to mould her into a study in contrasts that made perfect sense, but it really didn’t matter. Who she was, was so imperfect that it suited me perfectly.

The sky was just turning pink when I lost my battle to slumber – while the soul could have spent eternity listening to the low gravel of her voice that explained her rather strong but rather wrong views of Dostoyevsky’s work, the body craved some respite from the clock. I think she must have stayed up to read some more and watch the sun rise.

Come morning, the promising fog of the night had dissipated. A faint aroma of tobacco and the stains on the rim of the coffee mug were all that was left of her in the unforgiving glare of daylight. But it was just enough to convince myself that the midnight tryst was not a figment of an overworked mind that hadn’t been stimulated in a long, long while.